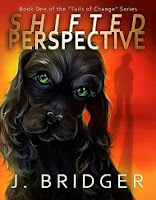 There are certain rules to be followed when reviewing a book, especially if you're an author yourself. One of them is to evaluate the book as it is, not how you would have written it. I admit to having bent this rule in the past, but have generally respected it. Don't throw stones, after all. Don't rock the boat, don't open that can of worms, etc., etc.. Pick any idiom you want, you know what I mean. Well, I'm about to rock the boat big time. Shifted Perspective is such a fundamentally wretched book that I'm going to stand it up before you all and give you an enumerated list of how, exactly, author J. Bridger turned a decent idea into the festering pile of refuse it is today. (Which is why it's a non-review.) Mr. Bridger, if you are offended by what I am about to say about a book that you provided to me free-of-charge in exchange for my opinion, I am sorry. But I'm more sorry for myself for having suffered through it, because each of these 192 pages was like a knitting needle stabbed into my chest.


The plot of Shifted Perspective is not unique, but it is serviceable. During his senior year of high school, Caleb discovers he inherited therianthropy from his mother, turning into a cocker spaniel once a month and/or at will. Mom conveniently vanished into thin air before she could explain anything about it, and Dad is clueless about the whole affair. Fortunately Caleb's aunt and uncle are also therianthropes, so summer after high school, he gets shipped cross-country to live with them and learn the ropes. He also gets involved in a love triangle with a beagle-shifter named Penny and his high-school sweetheart Jo, with all three of them investigating a series of apparent werewolf attacks on innocent humans.

Now, here's what the author should have done to make this idea into something readable:

1) Write a book, not a trilogy: Any time I see a indie author hawking a debut novel with "Book 1 of" printed somewhere on the title page, my guard goes up. I don't dismiss it immediately, because hey, everyone has to start somewhere, and besides that the entire PNR/UF genre is series-oriented these days. But it indicates two things: first, that this author has big plans, the kind of plans a first-timer often doesn't have the experience or discipline to carry to the big, explosive climax 2 to 11 books ahead. Second, that there's a very good possibility the author will unwisely try to "pace himself"; do a disposable story first, to introduce the characters and the world, end the story on a cliffhanger to tease the audience, and then bring the big, awesome ideas in the sequel, after you've gotten the audience hooked. Shifted Perspective follows this procedure to a T: nothing much happens, we've got a conflict that is mainly a backdrop for us to learn about the characters involved, and the epilogue introduces a whole new plotline that promises bigger things in book 2. Here's the problem: I won't be buying book 2. A lot of readers won't, and why should they? Nothing happened in Book 1. It was 100% buildup and scene-setting. It was boring, pointless, and stupid. Yes, you could say things will improve now that we've gotten it out of the way, but what guarantee is there? I'm the one who's being asked to pay, what assurance do I have that book 2 won't be more of the same? If you can't handle small ideas, what kind of a mess are you going to make out of big ones?

2) Stop telling me shit I don't need to know. Nearly every werewolf book I've ever read tosses in a pile of expository dialog explaining how lycanthropy works. A few of the more daring souls toss their readers into the deep end and say "Learn fast!" Those writers I respect. In so doing they have demonstrated respect for my intelligence and confidence in their own writing. For the rest, I've learned to live with it. I'll never be used to it, but it's not the kiss of death. I can tolerate it so long as it doesn't go too far. Shifted Perspective goes way too far; not only does it deluge you with exposition, but most of it is either easily deduced from the goings-on of the plot, or completely irrelevant to the story being told. I'd give you examples, but here's the kicker: I don't remember any of it. The stuff that he showed me rather than telling, that I'm pretty clear on. The pages of lecturing from Kalista, Penny, and everyone else just went in one ear and out another, with none of it having stuck. On the subject:

3) Cut the filler. A story should be as long as it should be. No longer, no shorter. True, the market is pretty strict on wordcount; an author who strays outside the 80-100K range and gets published is extremely lucky, but still, there's only so far you can stretch things by getting creative. Self-publishing should have changed this, allowing authors to publish a story at whatever length they find suitable, but it hasn't. This, combined with disobedience of rule 1, gives us books full of scenes that don't matter. If you're lucky, some of them are fun on their own. I admit I liked those early scenes with Caleb learning how to get by on four legs from his pet bloodhound Sampson. But most of these throwaway bits I'd just as soon throw away. After the book morphs into an amateur-slueth tale, we get a few scenes of Caleb and Penny chasing down false leads; first a seedy she-wolf named Fang, then a roving bunch of roaming werewolf bikers. Neither lead pans out, which is to be expected in this kind of story, but neither adds anything to the story either. The protagonists just kind of shrug, say "Oh, well", and go on as if the preceding scene never happened. It's obvious setup for the sequel, but none of these characters have any further relevance to the story. Their scenes are a waste of time. As is the entire first half of the book, which seems to be from an entirely different genre. Thus leading us onward down the list to:

4) Pick a story and stick with it. Above, I described Shifted Perspective as a mystery story. It is, eventually. But that's the second half. The first half is about Caleb growing into his fur back home in small town america, and not only is it a dull and plodding story, but the tone is completely different from the second half. It plays lighthearted and occasionally comical and totally different from the second half, with it's grisly murders and undertones of corruption and shifter-on-human prejudice. I don't have problems with concatenating stories together, but there needs to be some kind of thematic unity, some thread connecting them. As is, the first half is just more aggravating and uninteresting filler.

5) Don't keep the big stuff off-page. There's no excuse for this one. The big turning points of your narrative should be on-page, where they can have an impact, not recounted after the fact. Unless you have some arty reason for deliberate anti-climax, you don't want to just throw out the window an opportunity to catch the reader's attention. So imagine how appalled I was when, during a time-skip in part one, Jo is in a car crash and sustain injuries that make her susceptible to epileptic seizures. Now, Caleb and Jo are estranged by now, on account of Caleb needing to keep his Very Big Secret under wraps. But she's still very important to him, and we should have gotten at least some reaction to that. But not only do we not see any such thing, the incident itself hardly matters. It's only purpose in the plot is so that Jo can be suddenly incapacitated at a critical point and need saving. This isn't the only incident. The human-killing werewolf is eliminated off-page by a secondary character while Caleb is running for his life, and the character behind it all doesn't show up until the epilogue, with little or no foreshadowing beforehand.

Some of you might look at this and think I'm projecting. Damn straight I am. This book is everything I did wrong with Bonds of Fenris, and nothing I did right. There is a good story in here, but it needed a good editor, a lot of rewrites, and a heaping helping of murder your darlings to bring it out. An author on his own, with nobody to tell him what he's doing wrong, cannot possibly produce optimal work.

I think I'm pretty much done with self-pubs on this blog. In fact, from now on I'm not reviewing self-published books unless they're from an author I already respect or recommended by someone whose judgement I trust. Perhaps that makes me a hypocrite, but I just can't take another poorly-written, unedited piece of shit. These rank amateurs are killing my enthusiasm for reading.
Posted by LupLun at 6:11 PM

Available now at Smashwords and Amazon!

LupLun
Long Island, New York
LupLun, AKA S.J. Bell, is a fan, reviewer, and author of imaginative and fantastic novels. He has two blogs: one a place for his reviews, and one for other writings. Feel free to e-mail him at luplun[at]gmail[dot]com with reading recommendations or comments.

Necromancing the Stone, by Lish McBride